The system will identify the markers in near darkness. However, you will get better performance from the camera if you take a bit of care with the environmental setup.

If you click on the plus button, the quality indicators will expand to give the numeric value for each indicator, and some additional options:

The quality indicators also appear in Step 2: Capture, with an additional indicator "Detection": 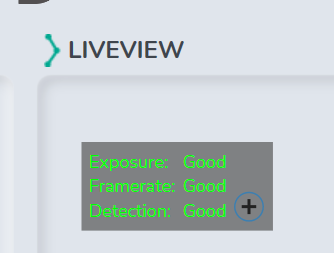 The exposure is how many milliseconds the aperture of the camera stays open to capture each frame.
Generally, you want the aperture to be open as short as possible, to minimise motion blur in videos and still images. But if the aperture needs to be open for long enough to capture enough light to make a good picture of the scene for each frame.
We want to get 30 frames per second from the camera, which means that the exposure should be less than 33ms. (33ms per frame x 30 frames per second = 1 second)
The Kinect camera has a built-in auto-exposure method. It works approximately as follows:
Sometimes, if we have imperfect lighting conditions or a pure-white or pure-black background, the Kinect camera won't do 30fps even though it looks like it should. In that case, we can override the Kinect camera's built-in auto-exposure function, and set exposure manually.
Just click the "Exposure mode" drop-down, and select "Manual Exposure": 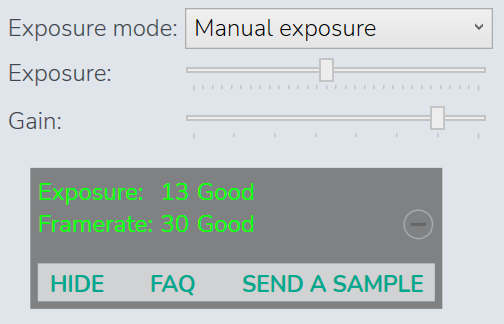 You will then see two additional controls:
Note that when using manual exposure controls, the image will sometimes look "flickery" under certain lighting conditions, depending on the frequency of your power source. You can vary the exposure slightly to reduce the flickering.

The framerate indicates how many frames Velogic Studio is able to take from the Kinect and process per second. If you are only getting 15/16fps, it's likely that the Kinect auto-exposure method is reducing the FPS of the Kinect camera. See the Exposure section above.

Detection shows whether the system is consistently finding exactly 7 markers.

Check out our troubleshooting guide if you’re having problems getting a good result with the Quality Indicators.